skip to main | skip to sidebar

More Genders Than Colors In The Rainbow

From the Scottish Sun comes the news that in their next census, "Scots face ‘baffling’ list of 21 sexualities to choose from in 2021 census including gynephilic and skoliosexual". Interestingly, the list does not include "Transexual" or "Lesbian" while both "Heterosexual" and "Straight" appear. This creates more genders than the rainbow flag can possibly represent. Here is the list, 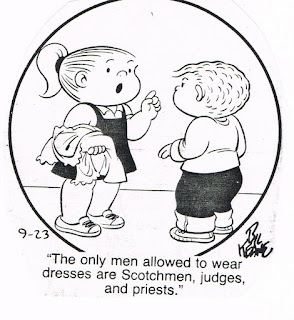 Posted by Undergroundpewster at 12:00 AM

Which Church Father Are You?

FCD for short, this course of study is available on-line (Updated 09/2012) and is a recommended (by me) alternative to EFM.

(Disclaimer, per FTC guidelines, I received no compensation or preferential treatment for this apple polishing endorsement)

You are never alone

Too Weird for Words (Enter at your own risk)